In the fifth century before Jesus walked with his disciples and preached about loving thy neighbor, a man named Guatama taught people how to get rid of sorrow. He belonged to a Himalayan tribe known as Sakya. He was considered their sage. It wasn’t until after his death that he was worshipped as a god. Buddha was not his name. Buddha means “enlightened one.” He was (or is) also known as the “Great Hero” due to his conquering of his “self.” About 325 B.C, India’s King Asoka was desperate to move away from the carnage of war. He became a Buddhist and placed monuments to Buddha throughout his kingdom, in the hope that people would follow the philosophy of living with order and kindness. One such monument to Buddha is what’s called the Lion Capital. The lion represents the moral power of Buddha and today it is the symbol of the Republic of India.

For quite some time, in Europe, “De” was used to distinguish those of noble birth. The right to use it was granted by the king. “De” is French and it means “of.” It is used in many surnames. If the surname started with a vowel it was written as d’. It is also seen as “des” and “des la.” It’s important to bear in mind that for example, the name Des Marets means “of Marets” and there may be instances where the surname will be listed under Marets, because occasionally the prefix is disregarded. The name Des Marets is also seen as Demaree. A change like that happens when the descendants merge the prefix with the suffix. Personally, I prefer the beauty of the ancient French name, Des Marets.

If you run across the prefix “te” as in “te Bonte” it probably means the same as “de.” “Te” is from the Old Dutch and is used to signify that something is located at, in or on.

What could be more popular than the name David? But who would think that the name “Taffy” is one and the same as the Hebrew name David, meaning beloved? The name David is popular in Wales, due to an early evangelist who bore the name. It may have looked like this: Dawfydd. If you look at it carefully, it would be pronounced Daw-feed. In Israel, David is pronounced Da-veed. Sounds almost the same. Maybe it’s because this Welsh David, made a pilgrimage to Jerusalem. 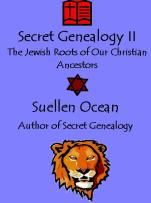 David is recognized as the patron saint of Wales. Over the years, the “D” got translated to a “T” and the result was Taffy. It’s used as a nickname for Welshmen. Legend has it that Wale’s Saint David was King Arthur’s uncle and David is the fellow to whom homage is paid for his successful battle against the Saxons. There is a big festival in his name occurring on March 1st. A leek is worn in his honor.

I heard a genealogist say that it is all too common for people to refuse to accept that their surname may have been other than it is today. David to Taffy? That’s quite a stretch. But it happens all the time in genealogy and we should not be too stubborn to accept a name change somewhere along the way.

The Daughters of the Holland Dames is an organization made up of the descendants of the early Dutch settlers to New York. They collected historical and genealogical documents that pertained to the Dutch Colonial period. They were also responsible for establishing memorials to their Dutch ancestors. The organization was founded in May 1895, to promote the legacy of the seventeenth-century Dutch. It is worth remembering that long before it was New York, it was New Amsterdam. And before that it was home to the Lenape Indians. If you look for it, you’ll find a Facebook page dedicated to the Daughters of the Holland Dames.